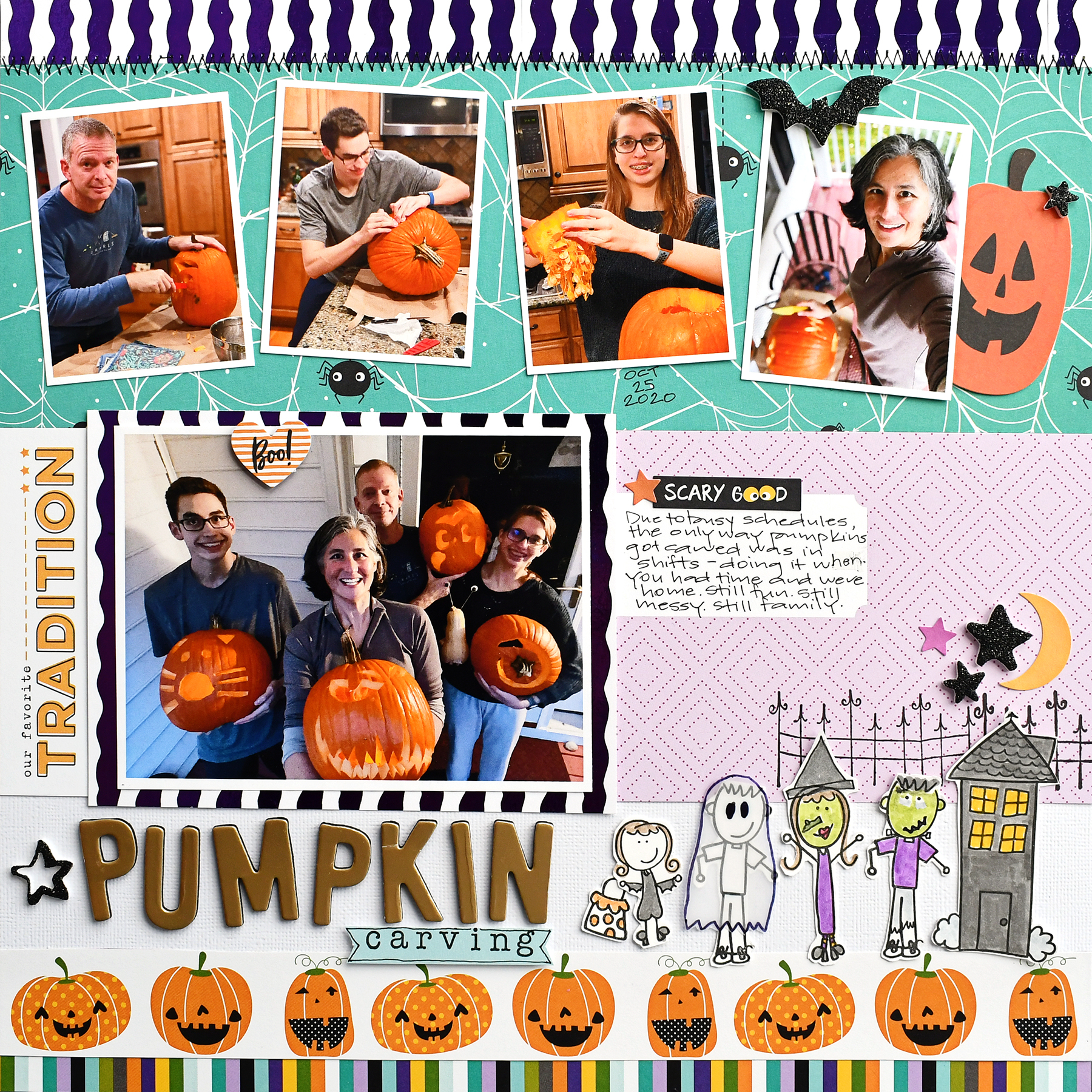 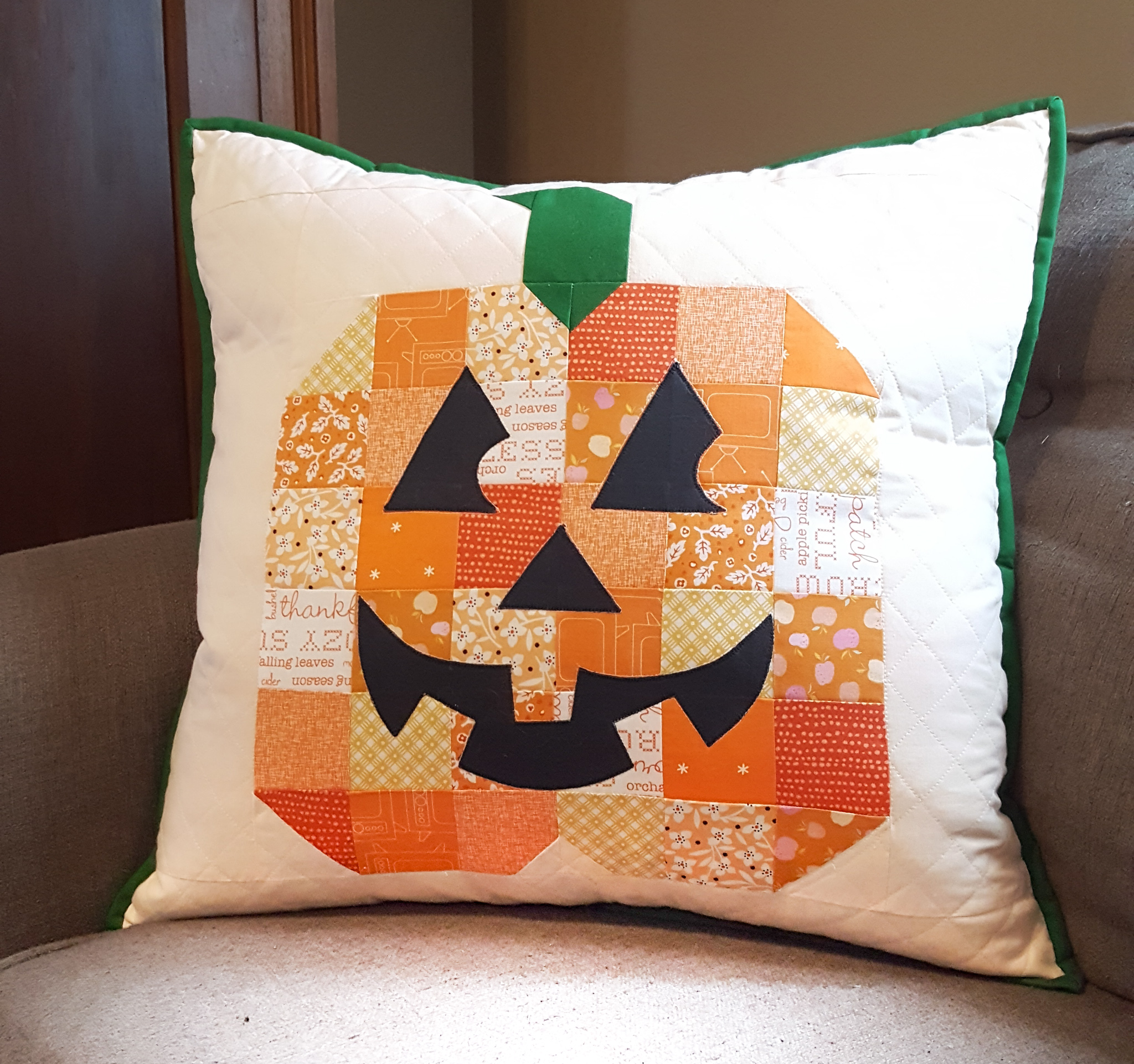 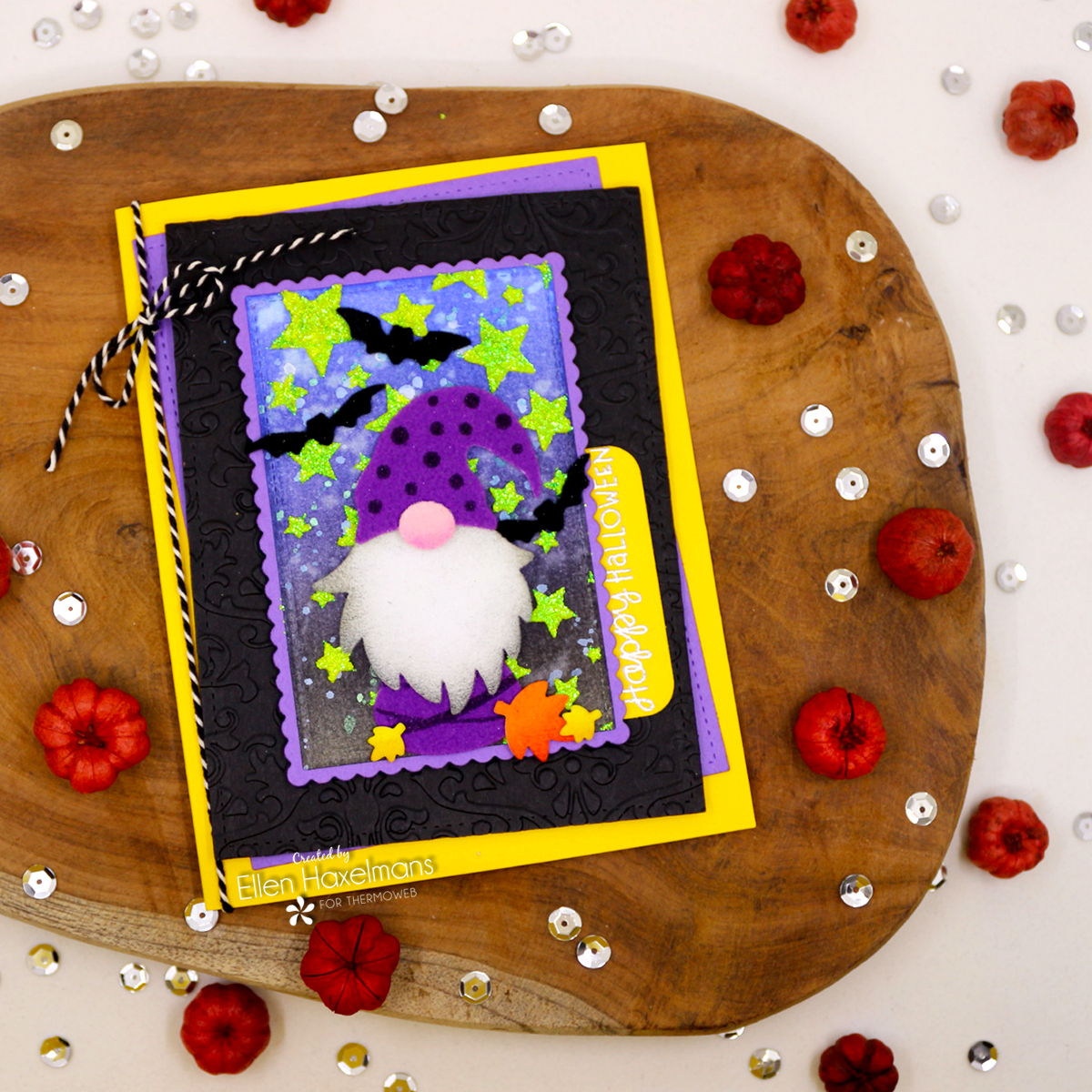 Hi!  Are you as excited about the gnomes as everyone else is?!  I know I am!  This is Katrina from Paper, Scissors, Glue and Hybrid Too sharing a Christmas layout using the original Gnome For The Holidays stamps, dies and stencil.  I have done a fall layout before with the set, so Christmas was a fun change!

Gnome for the Holidays Christmas Layout with Glitz

This layout started with an idea for the Gnomes Set and that Tall Birch Stamp that is in the background behind my picture!  I began by stamping the Tall Birch stamp in GKD White Pigment ink twice, lining it up with the outer page edge.  It does not meet in the middle, but that is hidden by my picture!

Let’s Get Those Borders Punched

Once I had stamped, I use two different border punches on four different pattern papers. The papers were 6×8, so I used the longer side of each paper and then trimmed the punched piece down to 6 inches.  This allows you to get the same effect on each side of the page with the border somewhat matching.  I covered the middle with an ornament I fussy cut out of the pattern paper in the collection.

Adhere with Our Runner XL

Once the top area of my layout was somewhat completed (or planned out), I started on the bottom section.  I trimmed papers and used my Memory Runner XL to adhere to my papers.

The mountains did not meet in the middle, so I covered it with my journaling area.  I used the “Merry Christmas” stamp from the set and stamped it with Amalgam Ink in Obsidian.  I LOVE this ink.  It dries quickly and is watercolor and Copic friendly!

Next was to start on my die-cut gnomes!  I wanted flocked beards, so I used Easy Cut Adhesive and adhered it to some white cardstock.  Next, I die cut the beard from that cardstock and removed the protective adhesive covering.  I placed my White Latte Flock Transfer Sheet flock side down to the adhesive and ran it thru my die-cut machine.  I carefully removed the flock transfer sheet and had a soft fuzzy beard!  I also did the noses in the same manner but used the Pink Carnation flock instead.

After the beards and noses were completed, I cut the shoes and bodies out of pattern paper using the dies in the set. Now it was time for the hats!  For the boy’s hat, I used pattern paper and then the stencil with Glitz Glitter Gel in White to add some polka dots.  There is also a stamp if you wanted to do that!

The girl was a little more work.  I made pigtails with bows out of DMC floss.  I used several full 6 strands doubled and tripled up in blond hair color.  The bow was just created with one full 6 strand of green that went with the paper collection.  I trimmed them to even them up.  I adhered the beard BEHIND the body and trimmed off the edges.  Once I had that done, I used the Ultra Bond Liquid Adhesive to adhere the pigtails to the beard.  I hid the ends under the hat.

To make her hat match, I used GKD Innocent Pink Ink and applied it straight to paper.  I used the Glitz Glitter Gel in Gold, along with the stencil to create gold polka dots on the hat.  Secret I accidentally flipped the stencil, so my hat is die cut from the back of the pink paper, not the front!  LOL

I die cut some trees out of pattern paper and placed them behind the girl gnome.  I cut off the darker green one to make it shorter than the others.  This give that area some interest, instead of trees all the same height!

And that’s my Christmas layout with the “Gnome for the Holidays” Set!  Be sure to pick it up and the add-on.  Last time it sold out within a DAY!  Thanks for stopping by today!

To celebrate our new release and the return of our Gnome for the Holidays Kit we’re inviting you to join us on Instagram Hop today at 10 am Central Time! Just click here to visit us on Instagram and join in the fun! We’re giving away four $50 Gift Cards to shop with Therm O Web and Gina K. Designs!

For our friends who don’t have Instagram…we’re adding a surprise giveaway right here! Leave us a comment and tell us what you’ll be making with this new Add-On and we’ll pick ONE random winner to receive a $25 Gift Card! Winners will all be announced on Monday, August 30th! So go join in the fun!
This post contains affiliate links. For more information, see our disclosure HERE.

Just a girl that turned 50 and loves her dogs, friends, photography and to create! I love to scrap the everyday, capturing some moments that might be missed. Learning how to sew which is an adventure in itself. At least I haven't sewn my finger yet!
August 24, 2021 by Katrina Hunt | 0 comment